Dual Fulfillment and a Future Tribulation

As an increasing number of Christians are beginning to recognize value of the historical context in interpreting Bible Prophecy, those who hold to a futurist view are pushing for a "Dual Fulfillment" principle. This enables Dispensationalists in particular to honor the imminent fulfillment recognized by Preterists, and yet apply them to future events at the same time.

The "dual fulfillment" principle is not new. At first glance there seems to be some basis for this methodology. There were certainly Old Testament prophecies that had dual fulfillments. One need look no further than the numerous Messianic prophecies in the Psalms, which applied to David's life as well as foretold of the Messiah. Isaiah 28:11 speaks of the Babylonian Conquest of the Holy Land, yet Paul uses it to describe Pentecost with the same type of judgment from the Romans (1 Corinthians 14:21). There is also a sense in which the judgment of Jerusalem in AD 70 is a picture of the final judgment. However, using such a principle to push specific New Testament Prophecies into the future is a questionable practice at best, especially when applied to the Great Tribulation.

For one, this principle ignores the fact that the focal point of all prophecy is the work of Jesus Christ. Because the Judaists of the First Century failed to see Christ in the Old Testament, they were blind leaders of the blind (Luke 6:39). Yet these things were revealed to the children of God, and a "dual fulfillment" of these events would demand a continued sense of blindness. Christ's first advent brought the gospel which was "to bring to light for everyone what is the plan of the mystery hidden for ages in God who created all things" (Ephesians 3:9).

Besides, it is impossible for certain prophecies to honor this principle. Will there be two Millenniums? Two Great Tribulations? Jesus' own words concerning the Great Tribulation demand that it can be only a one time event.

"For then there will be great tribulation, such as has not been from the beginning of the world until now, no, and never will be." (Matthew 24:21)

By this very description, a dual fulfillment of this prophecy would make it a false prophecy. The same is true for Daniel 2:44, as a kingdom that is established forever can only be established once.

Some prophecies, if pushed into the future, would require a triple fulfillment. Consider the charismatic application of 1 Corinthians 14:21 in regards to the Latter Rain movement. Since 1 Corinthians 14:21 is a dual fulfillment of Isaiah 28:11, any futuristic application would in fact be a triple fulfillment. The same is true with Daniel's "abomination of desolation". It was fulfilled during the time of Antiochus Epiphanes, but was also applied by Christ in the Olivet Discourse to the armed invasion of Jerusalem by Titus and the Romans (compare Matthew 24:15-21 with Luke 21:20-24). Thus any futuristic view of the abomination of desolation would require a triple fulfillment. The same can be said for the fall of Babylon in the Old Testament (Isaiah 13:1-22) applied to Jerusalem in the New Testament (Revelation 14:8, Revelation 17:5).

In short, using the "dual fulfillment" principle to warn of a future Great Tribulation is a practice of sensational desperation, not sound Biblical exegesis. Dispensationalism in any form is a theology with an exiled Christ, with no kingdom today relevant to the earth in which we live. While we may not know the exact order of events leading up to the Second Advent, we can know that the Great Tribulation, as well as the other events of the Olivet Discourse, is past history. They happened within the apostle's generation (Matthew 24:34), never to be repeated.
Posted by Puritan Lad at 4:07 PM 5 comments:

“But thou, Bethlehem Ephratah, though thou be little among the thousands of Judah, yet out of thee shall he come forth unto me that is to be ruler in Israel; whose goings forth have been from of old, from everlasting.” (Micah 5:2)

As the trees light up and the sounds of Carols resonate through the cold night air, millions worldwide will reflect upon a baby boy in a manger, a cultural icon of peace and good will towards men.

However, the real miracle of Christmas goes way beyond a mere human baby boy who was born in Bethlehem. The re 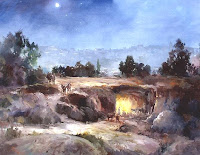 al miracle surrounds the hypostatic union of very God and very man. This is the ONLY orthodox Christology, that Christ was the very God (100%) and the very man (100%) in one person. To err in this area is to err to the destruction of your soul, for “...if ye believe not that I am he, ye shall die in your sins.” (John 8:24). The word “he” does not appear in the original Greek. Therefore the MKJV rendering of this passages correctly reads, “…if you do not believe that I AM, you shall die in your sins”, with the phrase “I AM” being a claim to Deity (Exodus 3:14). The temptation to worship Christ’s human nature is one of the most deceptive forms of idolatry.

Jesus Christ was the very God, and was also very man. He was not “God changed into a man”, nor was He some mixture of God and man. Christ did not relinquish any of His Divine Attributes during his Incarnation (Colossians 2:9). Christ’s divine nature was “been from of old, from everlasting” (Micah 5:2), for “before Abraham was, I AM.” (John 8:58).

Christ’s human nature was born of a virgin (Isaiah 7:14), the seed of a woman (Genesis 3:15), “God…manifest in the flesh” (1 Timothy 3:16). The idea of “celestial flesh”1 is an Anabaptist morbis mentis. Christ was not a created being, as the ancient Arians and modern Jehovah’s Witnesses teach, nor was He a “mode” of God, as the ancient Socinians and their modern Oneness deceivers would proclaim. Christ is one person with two natures, divine and human, being distinct from each other, yet clearly united to each other. Wilhelmus a’Brakel reflects the importance of meditating on the Incarnation of Christ.

“…let the incarnation of the Lord Jesus also be the frequent subject of your meditation, for the manifestation of God in the flesh is a “mystery of godliness” (1 Tim. 3:16). All true godliness proceeds from the knowledge of, and a believing union with, the Lord Jesus. This generates love and all that proceeds from love. Whatever does not proceed from this source cannot be called godliness. Even though nature may give us an impression of God and religion, it does not reveal this mystery. He who has only been illuminated outwardly is also ignorant of the frame of heart which proceeds from knowing Jesus (that is, as both God and man).” (Wilhelmus a’Brakel – The Christian’s Reasonable Service, pp.512-513.)

This Christmas, let us not fall into the idolatry of worshipping a human baby, but let us wonder at the miracle of God, in all of His Glory, being united to human flesh.

Related Article – The Orthodox Doctrine of the Trinity

1 “Celestial Flesh” is the belief among Mennonites and certain Brethren groups that Jesus did not derive his humanity from Mary, but from Heaven. The results are that Christ’s deity and His redemptive work become less important than His humanity, thus the focus is on Jesus as a good example as opposed to a Savior. The question for the Christian is not so much “What Would Jesus Do?” as opposed to “What Has Jesus Done?”
Posted by Puritan Lad at 10:25 PM 3 comments:

The Law and Offices of Jesus Christ

“And going into the house they saw the child with Mary his mother, and they fell down and worshiped him. Then, opening their treasures, they offered him gifts, gold and frankincense and myrrh.” (Matthew 2:11).

A reflection on the gifts of the magi can give one an understanding of the offices of Christ, as well as how the law relates to these offices.

Gold represents the Kingship of Christ.

Christ is the Almighty King, superior to all others. “On his robe and on his thigh he has a name written, King of kings and Lord of lords.” (Revelation 19:16). It is this particular office of Christ that is the most ignored today. If Christ is the Almighty King, then He should be obeyed. "Why do you call me 'Lord, Lord,' and not do what I tell you?” (Luke 6:46). What a travesty it is that professing Christians view God’s law with distain, implicitly deny Christ’s reign over their lives. “…You are not your own, for you were bought with a price...” (1 Corinthians 6:19-20). The kingship of Christ flies right in the face of the spirit of our age, which focuses on the importance of self. Such self exaltation and self deception leads to antinomianism, and against such Christ duly warns us.

A call to obedience is not legalism. Obedience to God’s commandments is legalistic only when it becomes the grounds by which we consider ourselves justified. Therefore, reflect on the authority that Christ has in both heaven and earth (Matthew 28:18), and, as His subjects, give Him the honor and obedience due an Almighty King.

On this point, we turn to the frankincense, representing the high priestly office of Christ. Just as antinomianism denies the kingly Office of Christ, legalism denies His priestly office. As high priest, Christ is superior to all other priests. “The former priests were many in number, because they were prevented by death from continuing in office, but he holds his priesthood permanently, because he continues forever. Consequently, he is able to save to the uttermost those who draw near to God through him, since he always lives to make intercession for them.” (Hebrews 7:23-25). However, the high priestly office of Christ only merits value to those who understand their miserable condition, who feel the burden of sin, and perceive its due justice. For that, the law serves as a mirror (James 1:23), showing us that condition accurately. It is then and only then that one tastes the sweetness of Christ, who administers His priestly duties through His once for all sacrifice (Hebrews 9:12) and His intercession (Hebrews 7:25).

The prophetic office of Christ is confirmed by the myrrh, a rather strange gift to give to a child. It was a burial spice, confirming the prophecy of Christ's death and burial (Isaiah 53:8-9). Christ was confirmed as the prophet promised in Deuteronomy 18:15 by Acts 3:22. It is a proper understanding of this office that undergirds the authority of the written word, as the words of the prophet were directly spoken from the very mouth of God (Deuteronomy 18:18). As Christ is the very God Himself, He is superior to all prophets. He is the end goal of all prophecy (Hebrews 1:1-2), and today administers His prophetic office by the written Word, being preached and expounded. "This is my beloved Son; listen to him." (Mark 9:7)
Posted by Puritan Lad at 8:43 PM No comments: