Worldviews, The Scientific Method, and Logic

"For the children of the Calvinistic Reformation, there should be no question of wasting time in long scholastic discussions about whether science and philosophy also pertain to the kingdom of Jesus Christ or whether they belong instead to a domain of natural reason. This discussion need not go on, because, as we have shown, there is no natural reason that is independent of the religious driving force which controls the heart of human existence."  (Herman Dooyeweerd - THE SECULARIZATION OF SCIENCE)


Is science neutral when it comes to metaphysics?  If not, then what kind of worldview does science require?

It is no accident that modern science has it's origins in Western culture.  This is not to say that other cultures, both past and present, have never dabbled in science.  Indeed, they have done so in limited fashion despite the fact that their worldviews not conducive to science.  In Eastern philosophies, the physical universe is considered to be "maya", or illusion, and the ultimate goal in these belief systems is to escape that illusion through enlightenment.  Thus any serious study of nature is bound to be limited as a result.  Pagan cultures tend to deify nature.  Therefore, any natural phenomenon can be simply written off as a non-transcendental act performed by an independent spirit, separate from other independent spirits.  Thus there are no real "laws of nature" to be studied, only spirits to be appeased.

Despite the modern efforts to push science into secularism, there are several major obstacles to science when is approached from a strict materialist point of view, many of which we have already encountered.  It is the Christian worldview that provides the necessary preconditions that make scientific enterprise possible.  Among the most foundational of these preconditions are the doctrines of Creation (justification that the physical universe is real) and Providence (justification for the uniformity of nature and inductive reasoning).  These presuppositions can be more readily seen as we examine the scientific method itself.

Here is a rundown, more or less, of what is referred to as the scientific method.

Before one can even begin the scientific method as an approach to examining truth claims, certain metaphysical assumptions must be made that a non-believer has no right to make.  The very first step, defining the question, requires a certain bias from the very outset, already precluding certain possibilities.  Other metaphysical requirements necessary to engage in any science discipline are as follows:


In addition to the metaphysical obstacles to strict materialism, the attempts to establish the scientific method as an authoritative truth in and of itself presents another problem.  The fact is that the scientific method cannot possibly tell us anything true about a hypothesis.  Rather, it is built upon the logical fallacy of Asserting The Consequence; ("If P then Q, Q therefore P" is not a valid logical argument), ie.

None of the above arguments are logically sound, yet scientific method itself (hypothesis, experiment, drawing conclusions) is based upon this fallacy.  Even if all of the other metaphysical issues surrounding science were to be either answered or ignored, materialists are faced with this discomforting fact:  A scientific hypothesis can never be proven to be true. The best case one can hope for is that the scientific method can show that any given hypothesis is a valid possibility.

Finally, when we remove the Christian foundation for Science, not only do we make the scientific method irrational, but we rob Science of any real explanatory value.  Science, in a purely secular world, cannot provide a valid explanation for the simplest things, but can only provide:

1.)     Definitions – mere tautologies with no explanatory value
2.)     Matters of observation – with no reason to believe that these observations have any relationship to reality, much less any justification for the universal and unchangeable “lawlike” character of laws.

P2: The laws of nature exists.

Unbelieving scientists live in God's universe, and like anyone else, must acknowledge Him in order to even function, though they may suppress the truth in unrighteousness.
Posted by Puritan Lad at 11:41 AM 1 comment:

Expressions Of Law: "Discovered" or "Selected"?

How does one actually go about discovering a scientific law?  When science expresses laws as mathematical formulas, how do these expressions relate to the reality of these laws?  Are they true?  Are they unchangeable?  Are the "discovered" or "selected"?

Aside from the fact that any scientific experiment faces the same obstacles that empiricism in general faces, additional issues arise when trying to draw conclusions from a given set of obtained data.  Take, for example, an experiment used to validate Newton's Second Law of Motion.  According to Newton's second law, a body will accelerate in the direction of any unbalanced force, and the magnitude of this acceleration will directly proportional to the magnitude of that unbalanced force.  The validity of this law may be tested by tying one end of a string to a known mass (20 g) and the other end to a glider.  The glider can be placed on a Stull-Ealing linear air track as shown below, reducing the friction of the glider on the track to a negligible value. 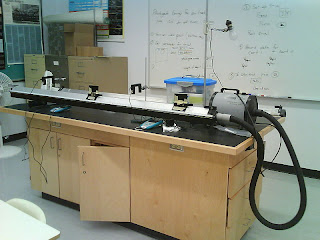 The time value can be measured with a power source which sparks every 1/60 of a second.  A wired is attached to the glider which fires onto the spark tape.  The mass of the glider in this particular experiment was 504.6 grams.  Thus we can arrive at a theoretical value as follows:

Let's suppose that the experiment, repeated a few times, yielded the following results:


Obviously, there is a notable difference between the actual a theoretical values.  Perhaps the forces of friction on the air track and the pulley weren't negligible after all.  Perhaps the air flowing out of the track exhibited an additional unbalanced force, however slight, upon the glider.  Perhaps the timed power source was inaccurate, or certain marks did not record properly onto the spark tape.  In any case, most scientists would feel that Newton's second law has been validated by the results of this experiment.

What do we make of the third measurement, which yields a result containing an error rate of 40%.  While the honest scientist would include this result in his reporting, it would be discarded as an anomaly for all practical purposes.  This is a problem in what Thomas Kuhn refers to a "normal" science.  Experiments are expected to yield certain results, and those that don't must be either explained away or ignored.  Thus we must conclude that science is not "unbiased".  Indeed, biases are necessary in science in order to have any progress or ability to build upon previous discoveries.

But the scientist is faced with yet another problem in trying to analyze the results of his data.  Typically, the scientist would plot his data representing points on a graph, as shown below. 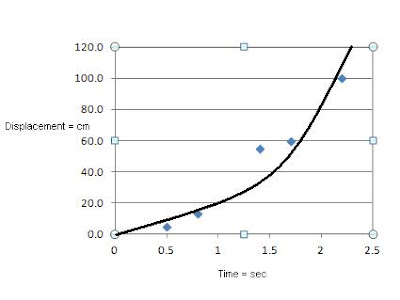 By connecting the points with a curve, the scientist would validate the law he was testing.  However, we can see that the curve does not pass through all of the "points" plotted.  This is due to variable errors on X-Y axis, which if taken seriously, would prohibit an experimenter from plotting data as points in the first place.  Instead, each plot would have to be a rectangle in order to account for errors in both the X and Y units, as follows. 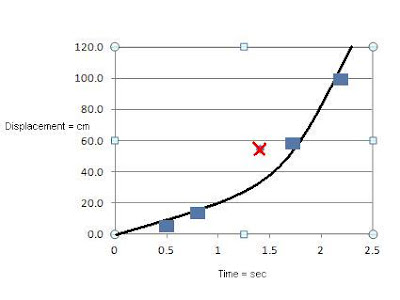 Granted, there are ways to get more accurate measurements than can be obtained by the crude setup shown above, but that would only result in smaller rectangles.  Since an infinite number of curves can be drawn through the proposed rectangular data, the chance of choosing the correct "law of motion" is 1/∞, or zero.  So when we see Newton's second law of motion expressed in the form ∑F = ma, we can conclude that the law, however useful, is false.

The role that scientific paradigms play in expressing scientific laws can be further understood by realizing that ∑F = ma is no longer the accepted expression of Newton's second law.  Instead, it is:

...at least until the next scientific revolution. Certainly the law itself hasn't changed (or else it would not be a law).  Gordon Clark explains:

"It may be a fact that gold is heavier than water, but it is not a scientific fact; it may be a fact that the longer and the farther a body falls, the faster it goes, but Galileo was not interested in this type of fact. The scientist wants mathematical accuracy; and when he cannot discover it, he makes it. Since he chooses his law from among an infinite number of equally possible laws, the probability that he has chosen the "true" law is one over infinity, i.e. zero; or, in plain English, the scientist has no chance of hitting upon the "real" laws of nature. No one doubts that scientific laws are useful: By them the atomic bomb was invented. The point of all this argument is that scientific laws are not discovered but are chosen." (Gordon H. Clark, Science and Truth, The Trinity Review; May, June 1981)


This does not in any way undermine the importance of science, but only to show what it can and cannot tell us.  Science is useful, but can never be validated as truth.
Posted by Puritan Lad at 5:27 PM No comments: